In May, China's hydropower output has increased significantly compared with April amid heavy rainfall in key production areas in the south.

However, it still fell short of expectation. Despite in a huge amount as a whole, the precipitation is quite uneven.

Taking Yunnan province ¨C one of key hydropower production regions in southwestern China ¨C as an example, the drought situation continued until the first half of May. The Ministry of Emergency Management even launched a national Level-IV emergency response on May 18 to the severe drought in Pu'er and Yuxi cities. It was not until mid-June that most of regions in Yunnan witnessed rainfalls, but mostly rainstorms, which were hardly used to generate electricity.

Therefore, China's May hydropower generation was still 16.5% lower than the same month last year, and the decline accelerated by 7.3 percentage points from the previous month.

From January to May, the year-to-date output totaled 355.8 TWh, an 11.3% fall year on year, which was an increase of 1.9 percentage points from January-April.

Among all major hydropower provinces ¨C Sichuan, Yunnan, Hubei, Guizhou, and Guangxi ¨C only Sichuan and Yunnan saw a month-on-month increase in May, while the remaining provinces showed a downward trend, with the largest decline in Guangxi reaching 26.64%.

The top provinces for hydropower generation in May were: Sichuan, Yunnan, Hubei, Qinghai, Hunan, Guizhou, Guangxi, and Gansu, generating a total of 70.68 TWh, accounting for 82.38% of the country's total. 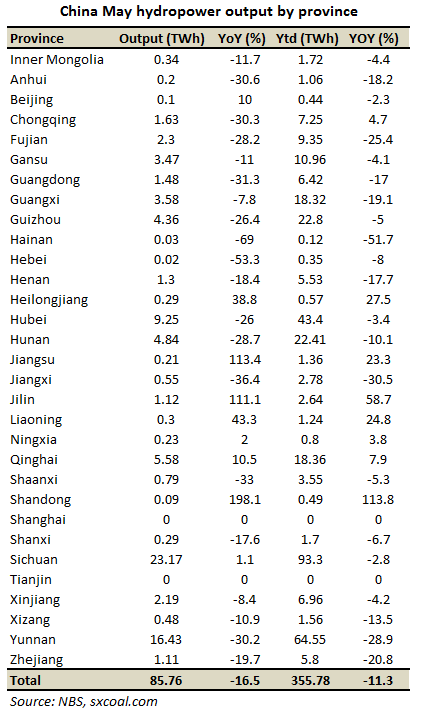 In June, as China's southern regions entered the monsoon season earlier than previous years, precipitation will likely further improve. This can also be seen from the water level of the Three Gorges Hydropower Station. Since June, the storage volume has increased significantly, even more than the same period last year in mid-June.

However, too much rainfall will result in floods above the alarm level, and it will, on the contrary, curb hydropower output, as hydropower stations will take flood prevention as a top priority by lowering storage volume to prepare for possible flood peaks.

Since the beginning of June, 52 rivers in eight provinces saw the flood rise above the alarm levels. In Hubei, the northwest, southwest, and southeast regions were hit by heavy rainstorms. The river water level rose rapidly and hydropower reservoir exceeded alarm levels, forcing all 285 hydro stations in the province to take an all-out effort to discharge.

In this case, upstream cascade hydropower stations will store water and reduce outflow, so that power generation will be curbed.

As the flood prevention is the first priority this month for most stations, sufficient precipitation will be difficult to convert into power. Hydropower generation will be less likely increase significantly in June.

All rights reserved. No reproduction is allowed without written permission.

Chinese seaborne import thermal coal market was still clouded by policy uncertainty late this week, as participants tended not to take positions temporarily amid expectations of more similar moves by

Prices of spot thermal coal moved sideways at China's northern transfer ports, where most buyers kept on the sidelines for further market developments. The spot market has flatlined for n

Chinese steel mills and coking plants have stepped up purchases of Mongolian coking coal on the heels of customs restriction on Australian shipments, sources said. Shipments of Mongolian

China is formulating new standards for steel scrap, which is on track to be published at the end of 2020, as part of a drive to alleviate iron ore imports, Xinhua news agency reported. Th

China's consumer price index (CPI) ticked up 0.2% month on month in September, with the growth easing 0.2 percentage point compared with August, showed the latest data from the National Bureau of Stat

Chinese coking coal market is likely to keep on the upswing in the remainder of October and even early November as coking plants and steelmakers need to restock for operation in the winter.

Prices of washed fat coal increased 20-30 yuan/t in Lingshi, Shanxi province during the week-long holiday, driven by solid demand from coking plants that lately succeeded in a fourth price hike.

Indonesia exported a total 24.73 million tonnes of coal in September, slumping 32.17% from the same month a year ago, and inching down 0.53% month on month, according to cargo-tracking data from Kpler

South China's Guangdong province targets to set up a flurry of offshore wind projects with total capacity of 15 GW over the 14th Five-Year-Plan period (2021-25), but its subsidy policy has not yet bee

Vietnam will substantially increase imports of primary energies such as coal and natural gas from now to 2030 to meet development needs, according to the Ministry of Industry and Trade. A

China is widely believed to maintain its tough attitude on import coal restrictions till the end of this year at least, in spite of its recent issuance of additional 5 million tonnes of import quotas

Please enter the key words, no blank or special characters